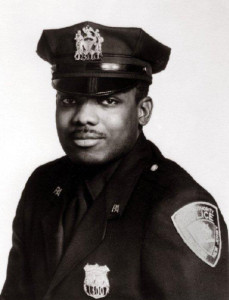 This garden honors the memory of Bruce Reynolds, who on the morning of September 11, 2001, rushed from his post at the George Washington Bridge into the inferno of the World Trade Center, sacrificing his life to save others.

Son of J.A. and Geraldine Reynolds, moved from Pittsburgh, Pennsylvania to Inwood when Bruce five years old. They were one of the first African American families in a predominately white, Irish-American neighborhood. Gang activity was rampant. Having parents as social workers helped Bruce navigate through difficult moments as his family’s reputation grew, offering events such as an open house party their first Christmas in New York.

Since the age of twelve Bruce wanted to become a policeman yet he also had a love of nature. Mr. Reynolds, Bruce and a few friends began clearing an abandoned area of Isham Park where he worked hours honing his skills and learning horticulture. The work was tireless and made more difficult by ever present gang activity. Much of the work done during the day was destroyed by night. Determined, Bruce’s father recruited 30 gang members to help assist in the area’s restoration. This outreach plus funding from the New York Department of Youth Services empowered and brought neighborhood youth together to restore the park, especially the area being cleared. Later, NYC Parks Director Joe Ross erected a chain link fence to further insure and protect the work done within.

Upon graduating from the Fashion Institute of Technology May 1980, Bruce joined the Department of Parks & Recreation as an Urban Park Ranger, where he met and befriended Adrian Benepe, also an Urban Park Ranger. Working closely many years their friendship thrived. Bruce’s knowledge of science and gregarious nature was remembered by all. In 1986, finally realizing his dream, Bruce left Parks and joined the Port Authority Police Department.

Bruce met his future bride Marian McBride of County Donegal, Ireland In 1990. The following year they married and bought a house in New Jersey. He later joined the Ancient Order of Hibernians. Bruce visited Ireland every
summer, spending time with the McBrides, walking in County Donegal’s bogs and singing in its pubs. Mr. and Mrs. Reynolds had their first child in 1997 and their second in 2000.